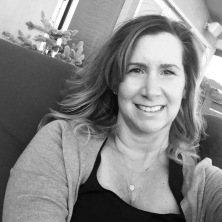 I’ve been officially diagnosed with depression for about 15 years, and not sure how long before then that I was living with it but had no idea.

I will forever be grateful to a wonderful boss who quietly called me into her office one afternoon and told me that I should think about talking to someone and getting help for depression because she lived with it too.

Throughout those years, I was treated with a variety of anti-depressants through my primary care physicians.  I saw therapists from time to time, but not consistently like I should have. Instead, I buried my head in the sand and kept on keeping on – I thought I was doing good, not great, but ok.  As years passed and my memory of what “good” was faded , I just kept on going. Avoiding seeing and doing the things that previously made me so happy became normal.  Since I lived alone, I didn’t have to explain my actions to anyone.

In 2013 I moved myself from CA to NJ for a job that I thought would be pretty darn close to perfect. Big company, big title, biggish pay and benefits.  But also a BIG distance from my family and friends (at least those I hadn’t managed to push completely away from me).  Well perfect rarely is, well perfect and I became even more isolated in NJ than I was in CA.  It was hard to meet new people, and since I didn’t exactly have the motivation to go out and do things, it was even harder.  I began missing work as my depression got to an all time low (or would it be high) – I didn’t sleep, I didn’t want to get out of bed (and didn’t), made up excuses for needing to be out of the office (lies were numerous) and struggled while I was there.  Finally, my boss had had enough and fired me which was likely the best thing he could have do – which allowed me to move home and be closer again to family and friends.

I was still at an all time low, but at least I was in CA!  I signed up for new insurance and it was then that my current MD suggested, er – mandated, that I see a psychiatrist in 2016, and again, I’m forever grateful for her.

I started to see my psych in May 2016 and she worked a miracle in that she prescribed new meds – kept my effexor but added Ability and Lamotrigine on top of it.  Slowly, I began to feel different.  I didn’t know what it was, but knew it was good – something I hadn’t felt in a long,long time.  Sooner than I’d expected (within 3 weeks or so) I realized I was ME again.

Hallelujah! Well not so fast.  My appetite increased – tremendously! I saw this, but also was so happy that I was ME again that I let it go.  Up one size – no biggie.  Up another – OK something’s going on.  Along with this gain of 25+ pounds came pains in my hands/fingers and feet/ankles – I felt like I had arthritis (but how does that just get so bad so quickly – is that what happens?)  So now, September 2016 I’m on another trek – withdrawing from the Ability and Effexor and going back to Wellbutrin and keeping on the Lamotrigine.  Crossing my fingers that this new combo works while I’m dealing with the brain zaps and nausea that are slowly decreasing.

That brings me to now…and while I’m optimistic about what the future holds, I’m also scared outta my mind that I won’t ever get to ME again.  So, I do the best I can every day and just keep on keeping on (KOKO) one step in front of the other